Sign up to myFT Daily Digest to be the first to know about Pensions industry news.

In a letter to the investment industry, the prime minister and chancellor Rishi Sunak said UK institutional investors needed to “seize the moment” and use their “hundreds of billions of pounds” to back assets that often carry a longer term payback such as infrastructure, which includes bridges, roads and wind farms.

They argue that UK assets are being overlooked by domestic investors. “UK institutional investors are under-represented in owning UK assets,” the letter says. “Over 80 per cent of UK defined contribution pension funds’ investments are in mostly listed securities, which represent only 20 per cent of the UK’s assets.”

Some of the world’s largest pension funds, including from Canada and Australia, have been active in backing infrastructure projects, including in the UK, which officials say has provided a long-term income for their investors.

Ministers also want millions of pension savers to be better able to support high-growth UK tech companies, which often miss out on institutional investment given a nervousness among fund managers to support riskier, lossmaking start-ups.

Pension fund trustees have a duty to act in the best interests of their members with the higher fees and charges associated with non-standard investments, such as infrastructure and private equity, seen as a barrier to steering cash into these sectors.

To address this, the government this year loosened a 0.75 per cent charge cap protecting millions of savers in defined contribution retirement schemes from high fees, so trustees can invest in sectors such as private equity, where hefty performance fees are common.

The Financial Conduct Authority is also helping set up the Long Term Asset Fund, an investment vehicle designed to boost pension cash investment in illiquid, and long-term, assets. This has been supported by the productive finance working group, chaired by City minister John Glen, which is looking at barriers to investment in such assets.

The letter says the government is doing “everything possible — short of mandating more investment in these areas as some have advocated — to encourage a change in mindset and behaviour among institutional investors”.

“The government remains open to addressing further barriers where they are identified,” it adds.

Dom Hallas, executive director of tech business group Coadec, said pension fund investment was “the next big step for the UK start-up ecosystem . . . the sooner we can move from discussion to capital allocation, the better.”

The Pensions and Lifetime Savings Association, which represents pension schemes with 30m savers and with more than £1.3tn of assets, said it supported the government’s ambition to ensure pension funds had the opportunity to invest in the widest range of assets. 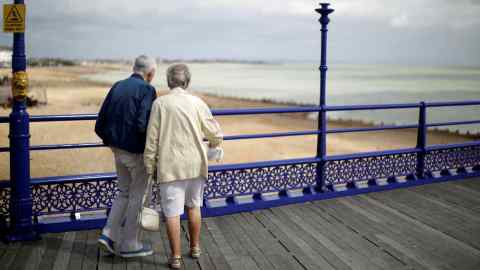 “It is welcome to also see [them] acknowledge that there is no single ‘right answer’ when it comes to how much pension fund trustees should invest in long-term UK assets,” said Richard Butcher, chair of the PLSA.

The government’s efforts to encourage trustees to direct more pension cash to help the nation’s economic recovery have caused concerns in some areas of the industry.

Andrew Warwick-Thompson, formerly The Pensions Regulator’s executive director for regulatory policy, in May accused the government of “pandering” to asset managers with its reforms to the workplace pension charge cap, which he said would increase fees for millions of workplace pension savers.

Roger Barker, director of policy at the Institute of Directors, also said there was a lack of detail on how the government will achieve its aims.

“The business models of many UK institutional investors are heavily oriented towards the achievement of short-term financial performance. It is unclear how the changes suggested by the government in this letter will fundamentally realign their approach towards the longer-term.”