Top Biden aide calls for US to embrace ‘industrial strategy’

A senior economic aide to Joe Biden has called on the US to embrace openly an “industrial strategy” to shore up its manufacturing base, including partnering with allies to bolster crucial supply chains and better compete with China.

Brian Deese, the director of the White House’s National Economic Council, said the pandemic had exposed “unique economic vulnerabilities” in US production, from medical supplies to computer chips, delivering a “wake-up call” to policymakers.

In remarks at the Atlantic Council on Wednesday, Deese pointed to strategic reasons why the US should provide incentives more aggressively to specific industries after decades of scepticism on the grounds that it would create distortions in the economy by picking winners and losers.

“The approach of our competitors and allies has changed,” Deese said. “We should be clear-eyed that China and others are playing by a different set of rules. Strategic public investment to shelter and grow champion industries is a reality of the 21st century economy. We cannot ignore or wish this away.”

The NEC director also called on the US and its allies to work together in the effort. “It is neither feasible or advisable for us to reshore all supply chains; partnerships with our allies that promote more stable access to key inputs while improving environmental sustainability and workers’ rights is essential,” he said.

The need for the US to shore up its domestic manufacturing base through more targeted investments has gradually been gaining bipartisan support in Washington, momentum that Deese is trying to harness.

Biden’s $2.3tn infrastructure investment plan, which is the subject of heated negotiations on Capitol Hill, includes a hefty chunk of manufacturing subsidies designed to help certain sectors, such as the semiconductor industry, produce more goods in the US rather than rely on imported products.

Deese pointed out that throughout US history the government had helped bolster industrial sectors, so a push to do so now should not be viewed as an anomaly in the world’s largest economy.

“In the early 19th century, when the country was transitioning from an agrarian to an industrial economy, we subsidised transportation and created a national bank,” he said. “In the post-WWII era, we as a federal government made strategic investments in emerging technologies including microelectronics, telecommunications and biotechnology.” 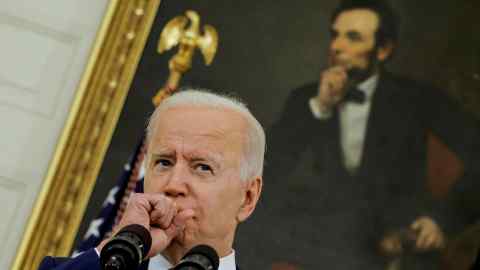 But Trump did not mount the same legislative effort as Biden has to revive domestic production, preferring to enact a large-scale corporate tax cut in 2017 that covered all parts of the economy.

Deese said more rapid technological change and the climate crisis were other reasons for the US to press ahead with an “industrial strategy”.

“The economic logic is straightforward. Markets — on their own — will not make investments in the technologies and infrastructure that would benefit an entire industry,” he said.

Deese rebuffed the suggestion that large US government public investment would unleash inflationary pressures, arguing that investments would be spread over a long time period.

“People are focused on inflationary pressures in the short term, that really is not the issue,” said Deese. “We’re looking at the implications of an economy that comes out of a policy-induced coma and comes roaring back in part because demand is so strong because of the ongoing success of the vaccination campaign.”