Spanish conglomerate Acciona is hoping to achieve a valuation of up to €9.8bn for its renewable energy arm, arguing it “might as well” get a flotation of the unit “over and done with” despite a sell-off in green stocks since the start of the year.

Acciona Energía had previously been expected to be among a rush of flotations in the renewables sector in Europe over the next 18 months, but the decline in climate-related stocks since January led to its Spanish rival Opdenergy cancelling its planned listing in May.

On Thursday, Acciona priced an initial public offering of a 15-25 per cent stake in Acciona Energía at a range that implies a valuation of between €8.8bn and €9.8bn for the renewable energy entity. The group is seeking to raise funds to nearly double its renewable energy capacity in just over four years.

In an interview with the Financial Times, Acciona’s chair and chief executive José Manuel Entrecanales acknowledged the recent market volatility. Stocks such as Orsted, the world’s biggest developer of offshore wind farms, rose to an all-time high in January but investors have since pulled back amid concerns over a “green bubble”.

But Entrecanales maintained the downturn in valuations was no reason to hold off from the IPO, arguing that the listing was necessary to tap financing and improve the ESG ratings of Acciona’s activities in the renewables sector by making them a standalone business.

“There’s no absolute need to do it now, but . . . you can’t wait to find the absolute top of the market, the peak moment: this is a 20-year project,” he said. “The most important reason [for the listing] is funding and rating.”

He added that the IPO was “quite disruptive for the company”, leading Acciona’s management to “defocus very much from our main objective, which is growing the business, so we might as well get it over and done with”.

Entrecanales’s family controls around 55 per cent of the Acciona conglomerate, whose activities range from real estate to water treatment. 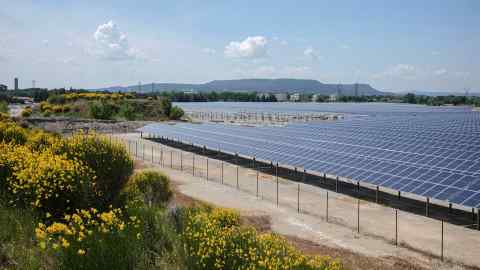 Entrecanales, who took over Acciona from his father in 2004, also argued that renewables valuations had improved in recent weeks. “Some of the reduction in prices that occurred . . . it’s kind of moderating lately,” he said. He dismissed other recent planned green IPOs as “an attempt to tap the market . . . [with] kind of start-up-like projects”, while not directly naming any other competitors.

By contrast, he depicted Acciona Energia as “a very seasoned . . . very conventional cash flow-generating company with a great deal of potential growth.”

The renewables group has 11GW of installed capacity but aims to reach 20GW by the end of 2025 and 30GW by 2030 through expanding in onshore wind and solar in particular. Spain remains its main market, although it also views countries such as the US, Chile and Australia as important growth areas.

Entrecanales maintained that, despite the recent downward shift in the sector’s valuation, longer-term factors that led to its surge last year still applied. These included European governments’ plans to spend much more on the energy transition, President Joe Biden’s election in the US and growing public concern about climate change.

Spanish oil major Repsol has also been looking at a possible listing of its low-carbon business while Italian rival Eni said in April that it plans to list or sell a stake in its renewable power business in 2022.

Energy is the world’s indispensable business and Energy Source is its newsletter. Every Tuesday and Thursday, direct to your inbox, Energy Source brings you essential news, forward-thinking analysis and insider intelligence. Sign up here.

China's entertainment industry is set to bounce back from Covid, says Chinese celebrity