Sign up to myFT Daily Digest to be the first to know about Bank of England news.

The Bank of England has appointed a new chief economist known for orthodox thinking on monetary policy and interest rates, and supportive of limits on quantitative easing to underpin the economy.

Huw Pill developed his views during many years as an official at the European Central Bank and at Goldman Sachs. Former colleagues described him as a monetary policy “hawk”.

The appointment, which includes a seat on the nine-member monetary policy committee, will mark a change at the BoE, which had become used to the unconventional thinking of the previous incumbent, Andy Haldane.

Pill will start his term on September 6 and move from Harvard Business School, where he has been a senior lecturer since 2018. The chief economist’s role is a permanent position while the seat on the MPC is for three years but renewable.

After a short spell at the BoE, the formative part of his career was, however, spent at the ECB, where he rose to the highest level possible for officials of non-eurozone countries and became close to Otmar Issing, then its chief economist, in the years running up to the global financial crisis.

Issing, now president of the Centre for Financial Studies research institute, developed the ECB’s “two-pillar” approach to setting interest rates that put weight on monetary aggregates in determining the underlying moves in inflation. He was delighted by Pill’s appointment on Wednesday.

“Pill was an outstanding economist in my team of excellent experts at the ECB. He combines top research with a broad and deep understanding of all aspects of monetary policy,” he said.

Other former colleagues, who declined to be named, described Pill as “very smart” and someone who was formed more in the mould of a central bank official than a Goldman Sachs banker.

In a recent book, published by the UK’s National Institute of Economic and Social Research, Pill authored a chapter calling for limits to be placed on central bankers in their use of unconventional monetary policies, echoing some of the recent criticism of the BoE in a parliamentary report that it had become addicted to quantitative easing. 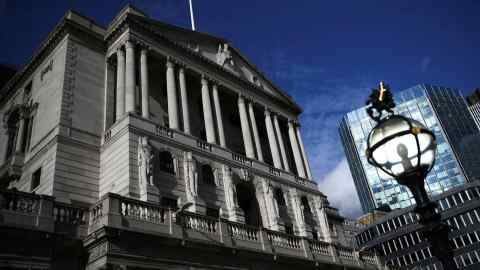 In the chapter, written before the coronavirus pandemic, Pill said that central banks should focus on their mandate to keep inflation under control and was sceptical of new policy ideas such as the US Federal Reserve’s willingness to keep interest rates low after a period of subdued inflation until the average inflation rate over time met the mandated 2 per cent target.

Instead, he advocated policy flexibility to allow inflation to deviate away from the target if that was necessary to counter the emergence of unsustainable pressures in the economy such as were evident before the 2008-09 global financial crisis.

But he called for limits on quantitative easing so that government would never be able to count on the central bank financing its deficits and thereby undermining price stability to “complement” additional flexibility for monetary policy in the short term.

Noting that there was an “understandable and inevitable” pressure on central banks to finance the government’s deficits, with potential longer-term costs for inflation, he said: “Defensible limits [on unconventional policies such as QE] for the new, post-crisis world are preferable to no limits at all.”

Andrew Bailey, BoE governor, said: ““Huw will make a major contribution to monetary policy — and to the broader work of the bank. I greatly look forward to working with him.”

Pill said: “It is a great privilege to rejoin the bank and have the opportunity to contribute to the work of the MPC and the bank more broadly at what remains a challenging time for monetary policy and central banking.”