Sign up to myFT Daily Digest to be the first to know about US economy news.

A sharp slowdown in US jobs growth precludes the possibility that the Federal Reserve will announce plans this month to begin scaling back its pandemic-era stimulus, economists say, as the spread of the Delta coronavirus variant muddies the economic outlook.

Following very strong payrolls reports in June and July, the US central bank readied for a reduction this year of its $120bn a month asset purchase programme, which it said it will keep in place until it saw “substantial further progress” on its goals of maximum employment and average 2 per cent inflation.

Those gains, coupled with surging US consumer prices that pushed inflation to its highest pace in 13-years, prompted several regional Fed presidents to call for a more immediate adjustment to be announced as early as the September policy meeting.

But August’s shockingly weak payrolls report, which showed just 235,000 jobs created last month compared to 1.1m posted in July, has upended that timeline and bolstered the case for the Fed to proceed more cautiously as it plots its retreat from financial markets.

“There was this sense that we were heading in the right direction on the labour market front [but] this slowing pace of job creation and the fact that the Delta variant remains a key downside risk is likely to favour a patient approach,” said Lydia Boussour, senior US economist at Oxford Economics.

“It rules out a September announcement for the start of a reduction in asset purchases,” added Joseph Song, senior US economist at Bank of America. “The key question moving forward is if this is a one-off print or if we are going to continue to see a deceleration.”

While the unemployment rate did decline to 5.2 per cent in August from 5.4 per cent the previous month, the Delta variant delivered a big blow to a number of important sectors that had finally begun to recover alongside a nationwide vaccinations campaign.

The leisure and hospitality industry posted no job gains for the month — an abrupt drop-off considering the average monthly increase of 350,000 positions seen over the past six months, according to the Bureau of Labor Statistics. 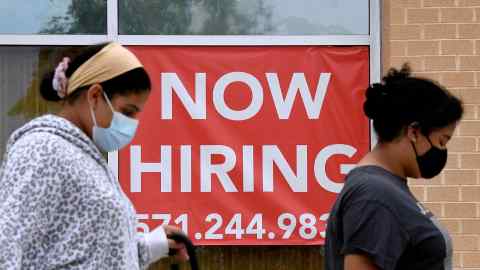 Retailers and restaurants were also forced to cut back, posting cumulative job losses of roughly 70,000, and more Americans reported last month that they were unable to work because their employer had shuttered or lost business due to the pandemic. That measure rose to 5.6m in August, up from 5.2m in July.

Until Friday’s report, the economic strain caused by the Delta variant was not yet obvious. Jay Powell, Fed chair, suggested at the end of July the current wave may have a more muted economic effect, but the magnitude of last month’s labour market setback has cast doubt on that view.

“To date we’ve seen central banks in general look through the Delta variant [and] it hasn’t pushed them off their policy path,” said Ellen Gaske, chief economist at PGIM Fixed Income. “But the slower data is starting to come in, and the Fed may become more cautious here and pause.”

Despite the remote chance of a September move, most economists and investors still expect the central bank to announce at some point this year its intentions to dial down its support.

At the Jackson Hole symposium last month, Powell said the inflation threshold to proceed with slowing the central bank’s bond buys had already been met, and there had been “clear progress” on the labour market front. He also expressed optimism that many of the factors deterring workers from filling a record number of job openings — including lack of childcare and enhanced unemployment benefits — are “likely fading”.

August’s jobs data featured fresh evidence that labour shortages are still holding back hiring significantly and that employers are having to raise wages to attract new people. Average hourly earnings jumped 0.6 per cent from July, for a year-over-year boost of 4.3 per cent — an increase Simona Mocuta, senior economist at State Street Global Advisors, said underscored how significantly supply constraints were affecting jobs growth.

“There is a huge conflict and contradiction here when you have an economy with more than 5m fewer people employed than before Covid, but you have record job openings,” she said. “Clearly there is friction, and no one knows how long it will last.”

The sharp acceleration in wages and the prospects it will push headline inflation even higher could also provide fodder for officials who worry about elevated price pressures and have argued for a pullback in monetary support, warned Peter Williams at Evercore ISI. He now expects sharper divisions across the Fed about the economic outlook.

The debate now centres on whether the Fed will be confident enough about the labour market recovery to announce tapering at its November meeting, when it will only have one more jobs report to parse. Constance Hunter, chief economist at KPMG, said a December notice was more likely at a time of such extreme uncertainty, while others caution the taper announcement could be pushed into next year.

“None of us know for sure whether this number is the start of a new trend or a blip,” added Paul Ashworth, chief US economist at Capital Economics. “All you can do is wait.”

The lasting legacy of financial literacy