Sign up to myFT Daily Digest to be the first to know about Brexit news.

UK chicken producers say post-Brexit immigration restrictions are to blame for staff shortages that have forced them to reduce supply, causing restaurants including KFC and Nando’s to cut menu items and close branches.

One of the UK’s largest chicken producers, 2 Sisters Food Group, said on Wednesday it was suffering a “chronic” shortage of staff to process birds, leaving clients including Nando’s short of meat.

Workforces have been affected by coronavirus but post-Brexit immigration restrictions have had a more severe effect, according to 2 Sisters.

The British Poultry Council has warned the government, in a letter to home secretary Priti Patel sent this month and seen by the Financial Times, that staff shortages have forced chicken producers to cut weekly supply by up to 10 per cent. It estimated the supply of turkeys this Christmas could be reduced by a fifth.

“We are facing a serious shortage of production operatives and processing staff that are classified as low-skilled workers in Home Office terms but play an incredibly important role in keeping food supply moving and feeding the nation,” the letter said.

It cautioned of “a real risk of irrecoverable food shortages and food price inflation down the line”.


The proportion of UK’s 40,000 poultry workers that come from the EU

The council called for immigration changes, such as making poultry workers eligible for “skilled worker” visas and including them in a seasonal labour scheme currently aimed at horticulture.

The warning over food supply comes as the UK suffers a shortage of lorry drivers that has led to disruptions in processing and distributing a range of products including milk and packaging. Covid infection rates and self-isolation rules have exacerbated the problem.

But high demand for chicken, combined with reliance on eastern European workers, has made the poultry industry particularly vulnerable.

Around 60 per cent of the sector’s 40,000 workers come from the EU, leaving it exposed to post-Brexit immigration changes. The new points-based system favours highly educated workers and those with job offers for higher-paid roles.

Not all suppliers have been affected: wholesaler Brakes said it had not experienced significant problems. But 2 Sisters, which also supplies supermarkets such as Tesco, said labour supply was a “critical issue” that was “unlikely to change” under the current immigration regime.

Avara Foods, another leading chicken supplier, said: “It looks increasingly like this is a structural change in the UK labour market, which shows no obvious signs of being resolved quickly.” 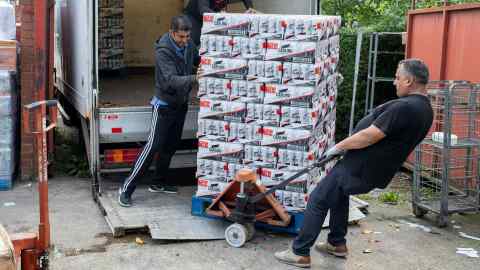 Poultry accounts for half of the meat eaten in the UK and the industry operates a tight supply chain run on narrow margins. A sudden rise in chicken demand from restaurants, which were allowed to return to trading without restrictions on July 19, has exacerbated shortages.

Nando’s has shut 45 of its 450 restaurants this week because of the disruption. It said it has deployed 70 of its staff in rolling shifts to suppliers to help pack chickens.

KFC, which in a tweet last week warned of supply problems, said that some restaurants were facing shortages and that they “may need to make temporary changes to their menu”.

Marielle Agawin, a manager at London-based restaurant chain Bird, said her Canary Wharf site had been short of chicken thighs and wings on several occasions. “We don’t stop trading but it makes it more complicated,” she said.

Jollibee, the Filipino fried chicken group, said it was “making contingency plans” to cope with shortages.

A government spokesman said: “We are looking at ways to help the sector recruit more domestic labour and invest in automation in order to reduce the reliance on migrant workers coming into the UK.”

Food companies and restaurateurs have also warned of tight supply in packaging materials, greaseproof paper and some cuts of meat, causing price rises just as operators struggle to keep up with wage inflation resulting from the lack of workers.

Shan Selvendran, managing director of the fast-food chain Morley’s, said that the price of lamb ribs in particular had “skyrocketed”.

Most Fed officials believe stimulus could start winding down this year