Sign up to myFT Daily Digest to be the first to know about Baidu Inc news.

Baidu, China’s leading search engine, has raised $1bn in a heavily oversubscribed bond sale on strong appetite from investors even as its shares have been hit by Beijing’s regulatory crackdown on tech groups.

The debt sale attracted between $5bn and $6bn of orders, according to two bankers who worked on the deal.

The dollar debt issuance comes as Chinese authorities have engaged in a sweeping 10-month campaign targeting the country’s largest technology companies. Baidu’s shares are down by a third this year, while on Thursday the Hong Kong-listed stock of Alibaba fell to its lowest level since the ecommerce group’s secondary listing in the city in 2019.

But Baidu’s first environment, social and governance bond drew strong demand as investors appeared confident in the tech group’s ability to pay off its debt despite sharper regulatory scrutiny.

“We had tonnes of questions on the impact of regulatory announcements and regulatory uncertainty, that was certainly top of mind for many investors,” said one banker on the deal. “But the strength of Baidu’s credit overwhelmed those concerns.”

“It’s a positive signal [for Chinese tech] but it can’t be taken out of context,” the banker added.

Baidu, which dominates online search in China, priced the 5.5 and 10-year sustainable bonds at 1.625 and 2.375 per cent, respectively. That is about 0.83 and 1.13 percentage points above the equivalent maturity US Treasuries, according to terms seen by the Financial Times.

Bankers said the final pricing was much lower than initially expected, with rates on both tranches more than 0.3 percentage points below initial guidance. Baidu received a quota this month from Beijing to issue up to $1bn in dollar debt.

“It’s interesting timing given the regulatory noise,” said one debt financing banker. “But the regulatory talk is all about VIE structures, data privacy and anti-monopoly, and that affects the growth prospects of these companies, not their underlying creditworthiness.” 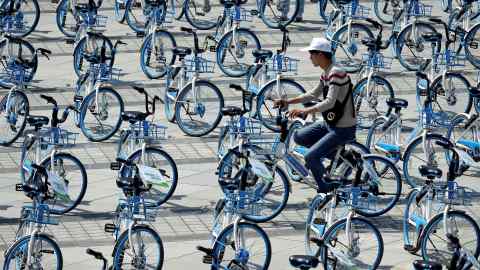 He said there was “little hesitation” from US, global or regional investors that bought into the bond.

That is despite China’s biggest tech groups warning that further scrutiny from Beijing is on the cards. Martin Lau, president of Chinese internet group Tencent, told investors on Wednesday that pressure “will be coming from all different regulator entities . . . we think that there will be quite a few [new measures] coming out”.

Yet the positive response to Baidu’s debt sale lays the groundwork for more large issuances by Chinese tech groups whose shares have been hit in recent months, the head of fixed income at one European lender said.

Chinese entities have raised $123bn in US dollar debt this year, according to Dealogic, compared with $127bn raised in the same period in 2020.

“Should they decide to press the button and [tap global bond markets] I’m sure they’d get investor support, no doubt,” the banker said.

Oil futures decline, with U.S. prices at their lowest finish since May